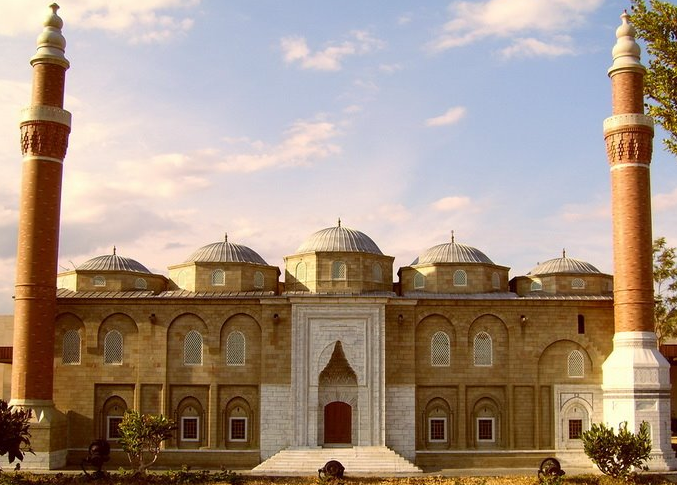 Turkish architecture is one of the most magnificent work that is left to us. According to Evliya Çelebi Bursa Grand Mosque is the Hagia Sophia of Bursa. It is known as the fifth holy place of Islam. Ok well I'm talking to you from the Great Mosque.
The Grand Mosque was built by Bayezid I The Thunderbolt who was the fourth Ottoman Emperor and its head architect is Ali Neccar between 1396-1399. Before Nicopolis victory, in case of victory, Bayezid I The Thunderbolt decided to have twenty Mosques. But then he was built twenty dome mosque instead of twenty mosques. Bursa Grand Mosque is the biggest place of worship in terms of place to worship. The Grand mosque has a fountain in the middle. This fountain has an interesting property. If you go to Bursa Grand Mosque (absolutely go) you will feel that amazing airflow. The airflow is provided from several thousand tiny holes and several hundred big holes situated on the thick walls. The air, flows through the domes (where the hot and polluted air is stuck), after that the air accumulate just upon the fountain, the air is aspired by the water flow of already used water. After all the fresh and cooled air flows all over the Mosque’s floor and low passing by. Finally quits the Mosque using the doors. That is why the doors are always open, and also that is why you feel the amazingly fresh and cold air when you are at the gates or near the fountain. A water air cleaning system which uses basic air properties, like the airflow in cooling towers, and nothing else used, made operational in 1421. That is wonderful!
Another aspect of Grand Mosque is hand writing on the walls. These hand writings written by twenty-one calligraphers. There are Allah names, verses of Quran, hadith and good words. These hand writings’ topics are, belief, justice, pray, pilgrimage, worship, deeds, patience, halleluiah etc.
The Grand Mosque’s the most attractive aspect is its minbar (Addressing the congregation where the imam called minbar). This structure has an amazing astronomy. To the west side of minbar, the solar system is processed. To the east side of minbar, the galaxy system is processed. Research on this minbar; this information are confirmed. This was done with art kundekari which is a type of architectural art. Minbar consist of 6666 pieces (6666: these numbers is equal to the number of verses in the Quran).
We cannot finish telling the great mosque. Really, it is a great structure. I think, you should go to Bursa and visit the Grand Mosque. Absolutely, there are so many things to see in Grand Mosque. Best Regards...